The history of the pasta extrusion press

Let’s explore the fascinating history of the pasta extrusion press, already used in the Renaissance and now an essential machine in pasta factories. A journey that will even bring us to America with Thomas Jefferson and his macaroni machine.

The pasta extrusion press is a machine used to perform the delicate phase of shaping pasta and is for the domestic, artisan and industrial production of pasta through drawing. The dough was manually placed inside the “chamber” of the extrusion press and pushed under the pressure of the screw through the die plate, which allowed the desired shape to be formed. The pasta was then cut manually by the pasta maker or with a rotating mechanical knife located outside the die itself.

The entry of the extrusion press into the world of pasta was a real revolution: knives, chitarre for spaghetti, irons for macaroni and other objects to form pasta would be replaced by a more powerful device that would allow producing more in less time.

"Assottigliato" painting of the Accademia della Crusca in Florence (after 1615) 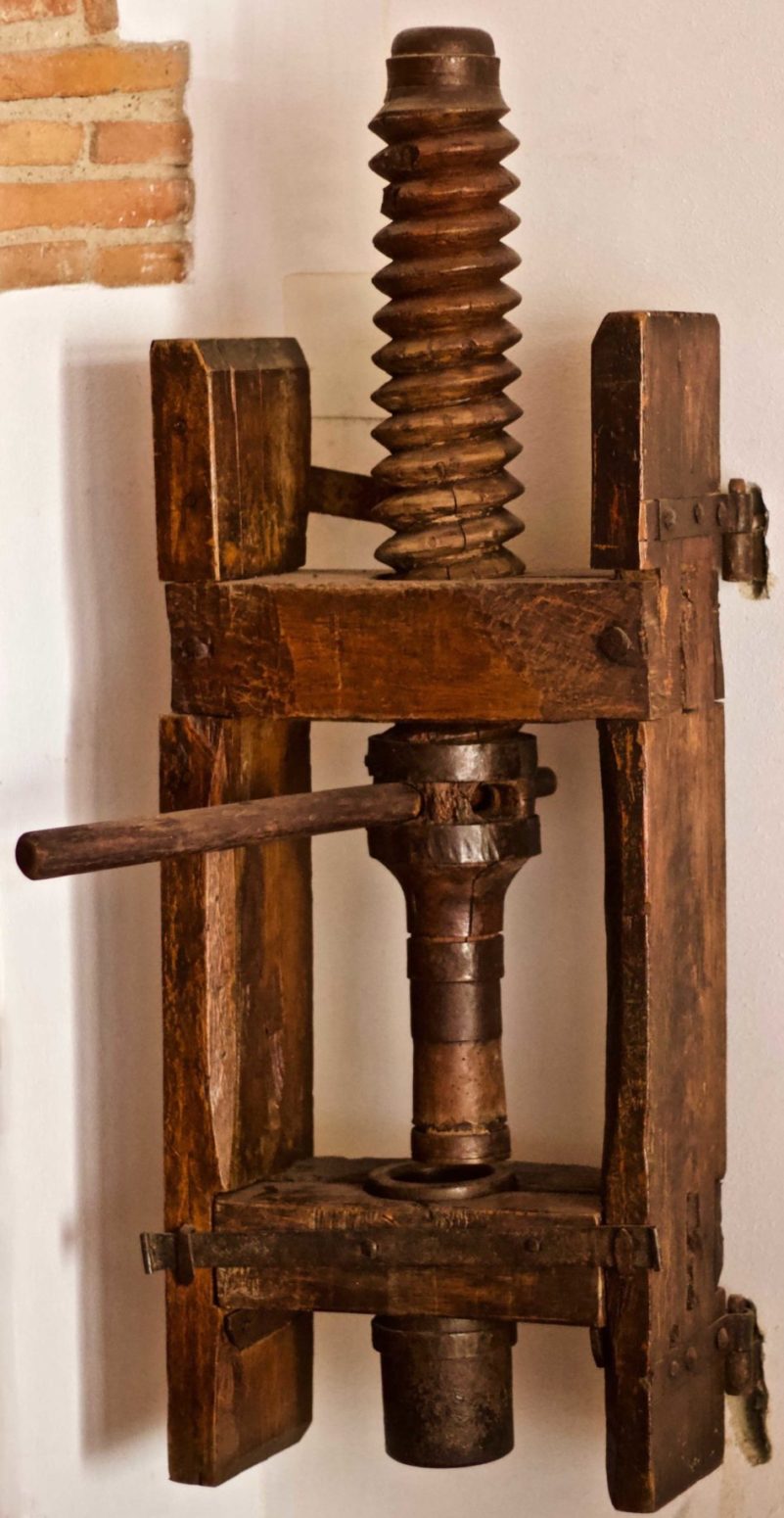 We owe the first testimony of the ”macaroni invention” to Christoforo Messisbugo (±1548), a cook at the court of Ferrara in the first half of the 16th century. Neapolitan pasta makers were among the first to adopt it: in fact, its common use is reported in several documents of 1579, 1596 and 1634.

We instead find the first depiction of the pasta press in about 1615, painted by an unknown Florentine on one of the famous paintings of the collection of the Accademia della Crusca and then drawn in pen by Niccolò Cini before 1638 (see photo above).

The workshop of the vermicellaio at the time of Malouin (1767) 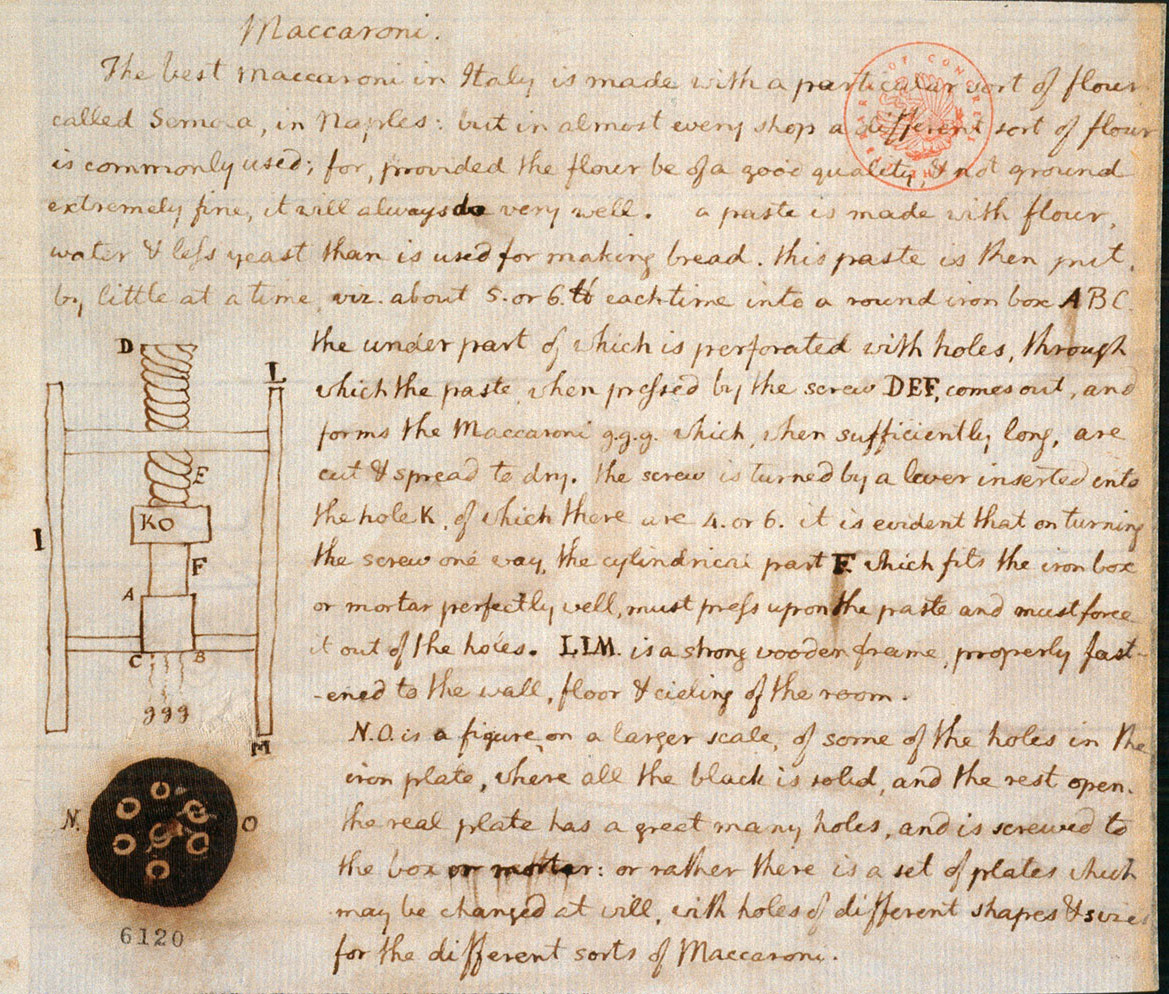 We then had to wait until the end of the 18th century to have a technical description of the apparatus in Art du vermicelier (1767) by Paul-Jacques Malouin, French physician and chemist, who meticulously painted the manufacturing processes of vermicelli in both France and Italy.

It is a wooden apparatus with a bronze chamber: an extrusion press comparable to that represented in the notes of the future American President Thomas Jefferson in February 1789 (see photo above) – then ambassador to Paris – who is said to have imported the first pasta machine to America. The impressive resemblance of these apparatuses with the extrusion press of the Fabbri museum (see photo above: wooden winch press) allows us to place the date of the object around the second half of the 18th century. 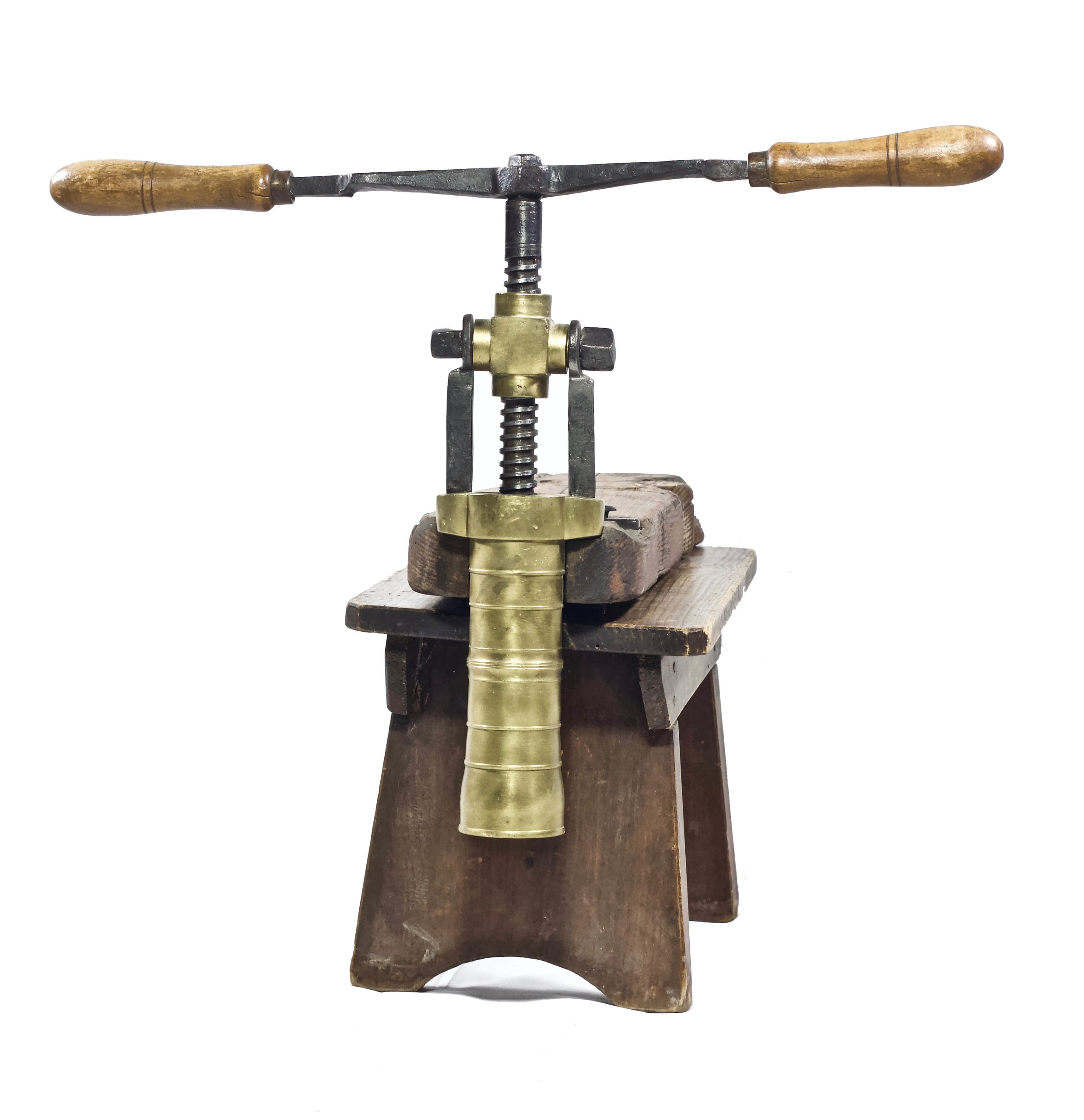 The development of the 19th century pasta industry not only increased production yields but also made it possible for families to purchase extrusion presses. The apparatus was produced in cast iron and brass with a horizontal screw for the production of short pasta and a vertical screw for longer shapes.

In families, homemade pasta was preferably prepared with eggs, with a bronze extrusion press known as bigolaro in Veneto. The apparatus was fixed to a wooden support (usually a table or stool) and operated manually using handles. Once the dough was inserted into the chamber, the pressure screw (called nut screw) pushed the dough towards the die plate to push the desired shape out. 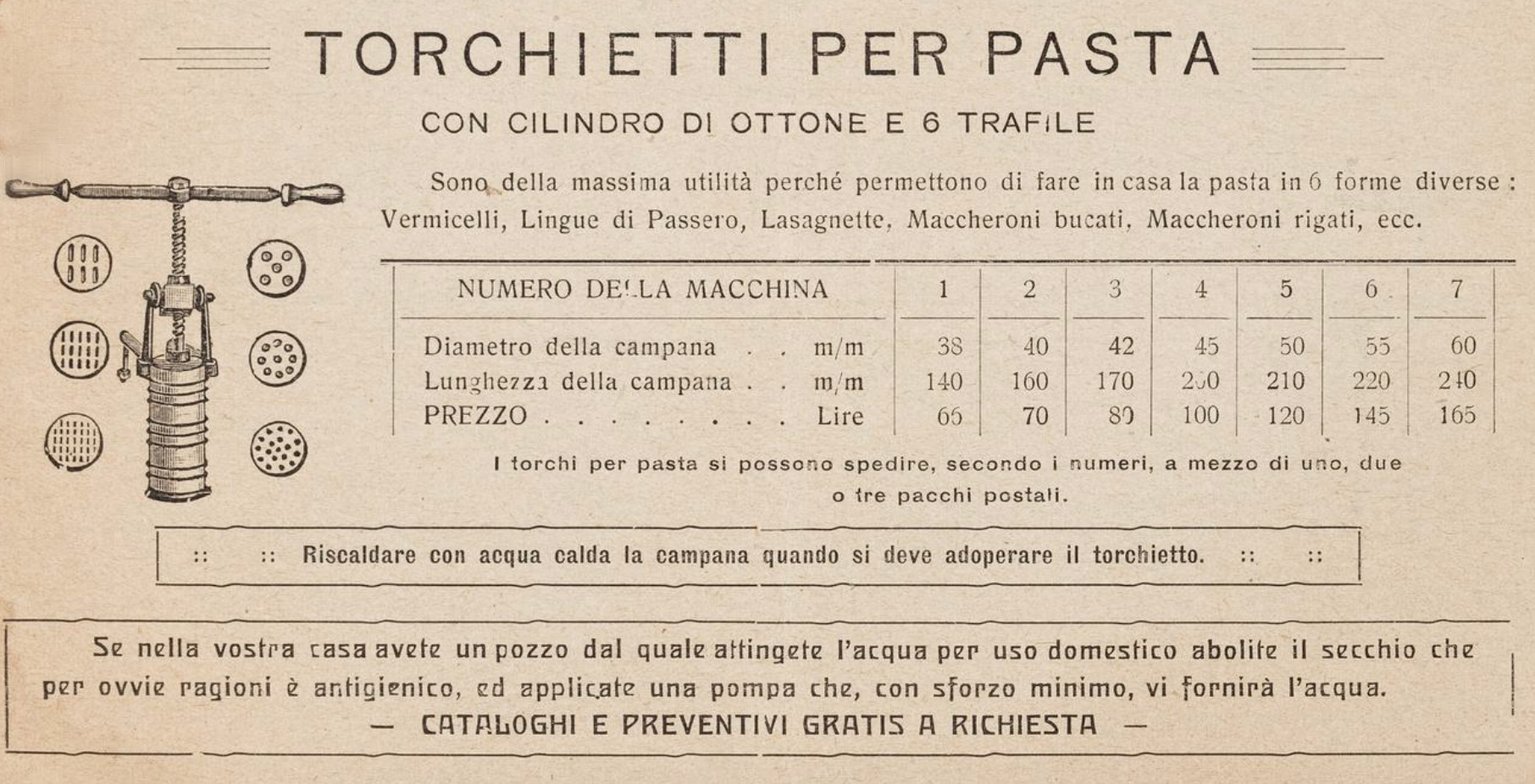 Advert depicted in the Special Catalogue for Machines for the Home and Small Industries, Orfeo Orfei of Naples, January 1926

At the beginning of the 20th century, these presses were sold with a set of six brass die plates with a capacity of about 1 kg. Until World War I, the price was between 10 lire and 30 lire (depending on the size of the internal diameter of the chamber) and between 65 lire and 165 lire later (for the same size).

The advent of steam machines, and then the advent of electricity, radically transformed pasta production methods. Extrusion presses became increasingly efficient and were eventually integrated with super-powerful machines capable of performing the three essential operations of the production process: mixing, kneading, and drawing. The Braibanti “continuous press” made in 1933 was the definitive step towards the mass consumption model of today. Pastificio Fabbri owns an improved model of this machine, purchased by Nonno Renzo in 1958, which is still the heart of its production today.

Continuous extrusion press from the Cantini company, acquired in 1958