In 1911, Pastificio Fabbri passed from using a marble wheel with a horse to electricity, offering its customers what was known as “hygienic processing” in Italy. To accompany this change, the historic mechanical construction plant Pietro Veraci [1] of Florence proposed a quote accompanied by a plan for the future Pastificio plant and the drawings of future machinery. Let’s examine these exceptional items from the archive: 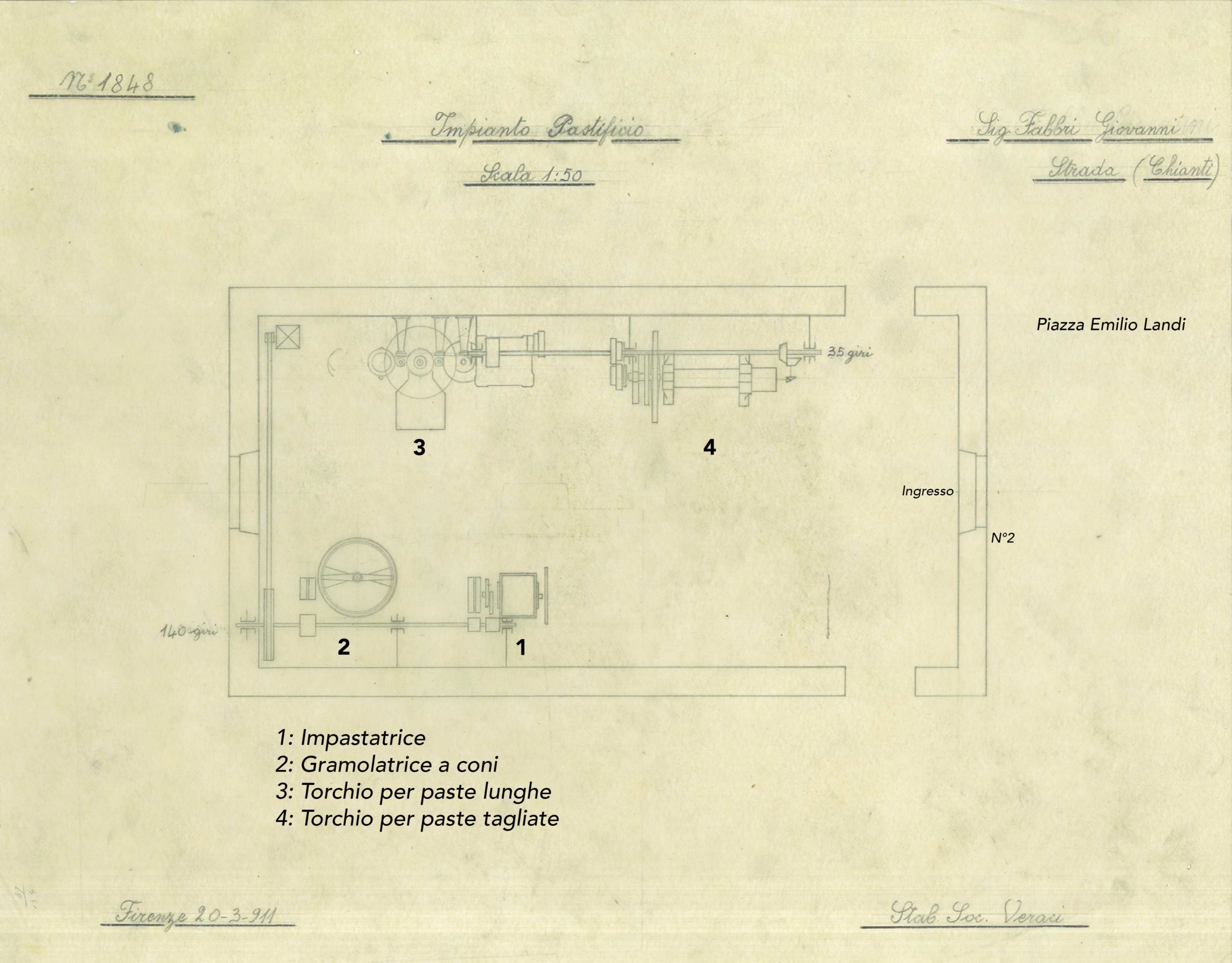 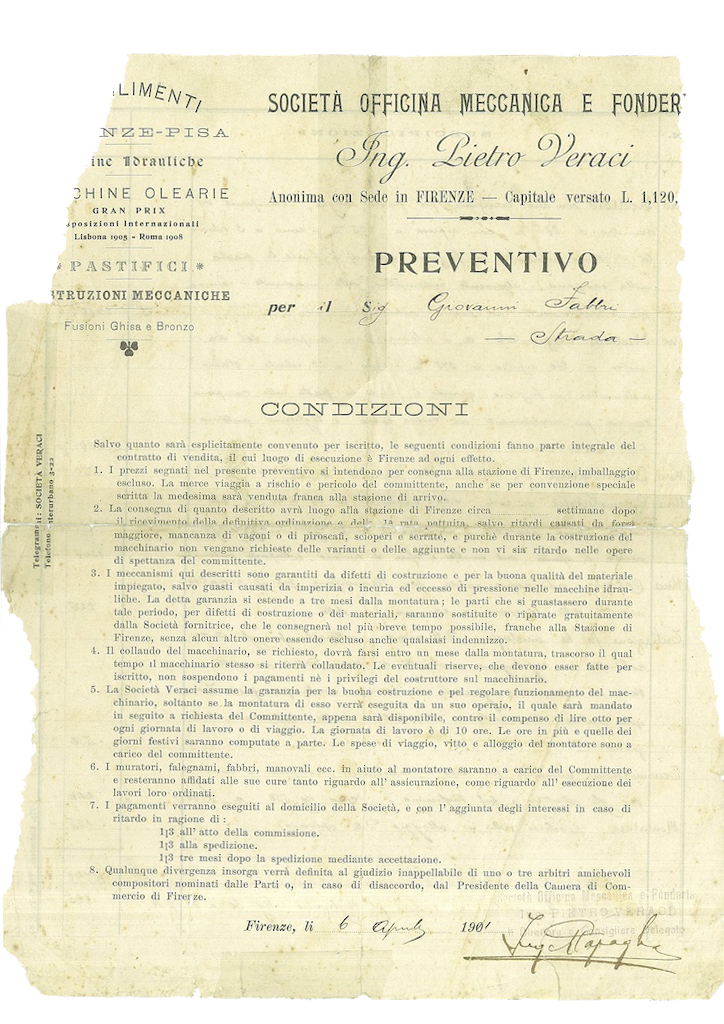 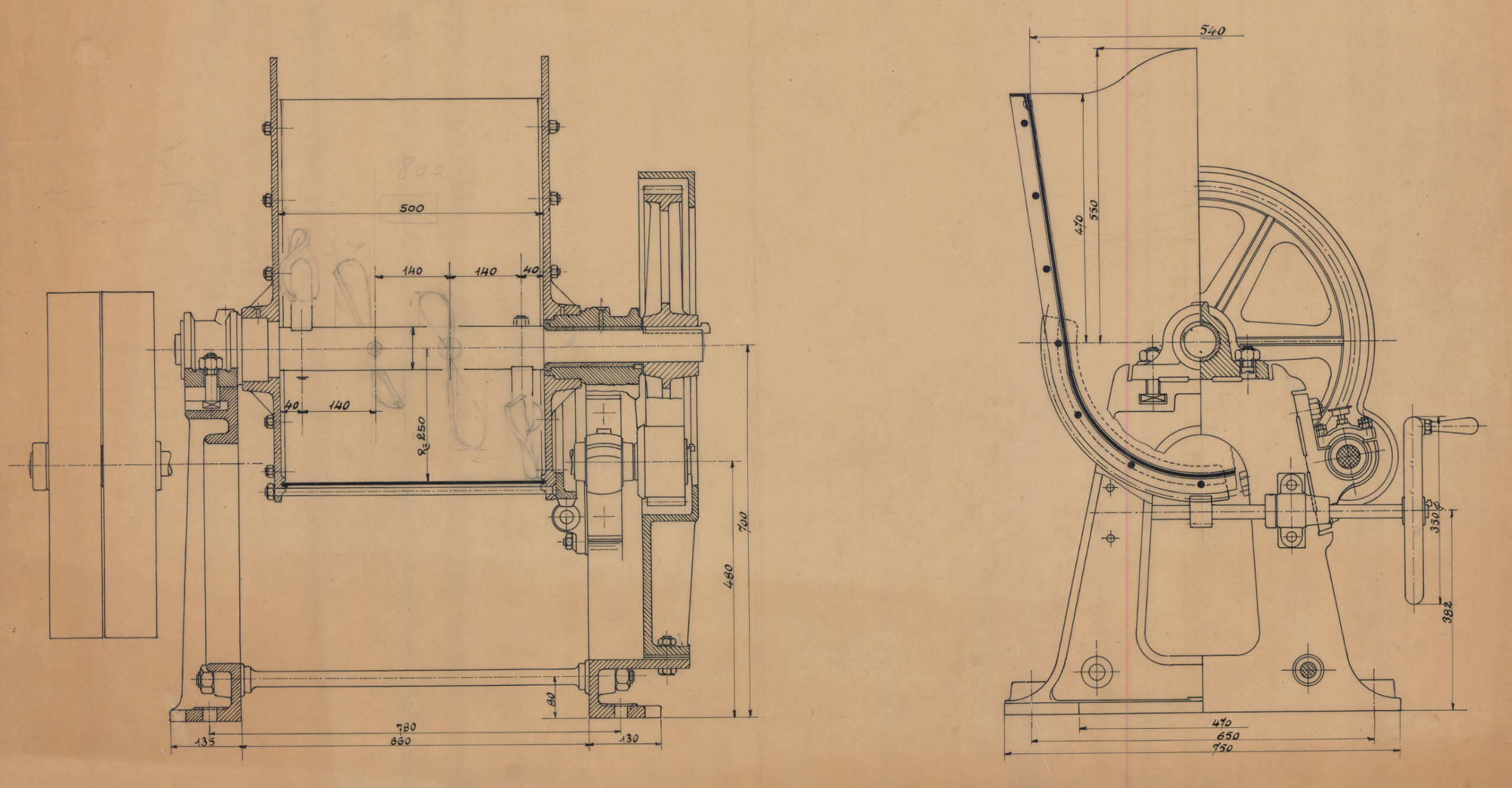 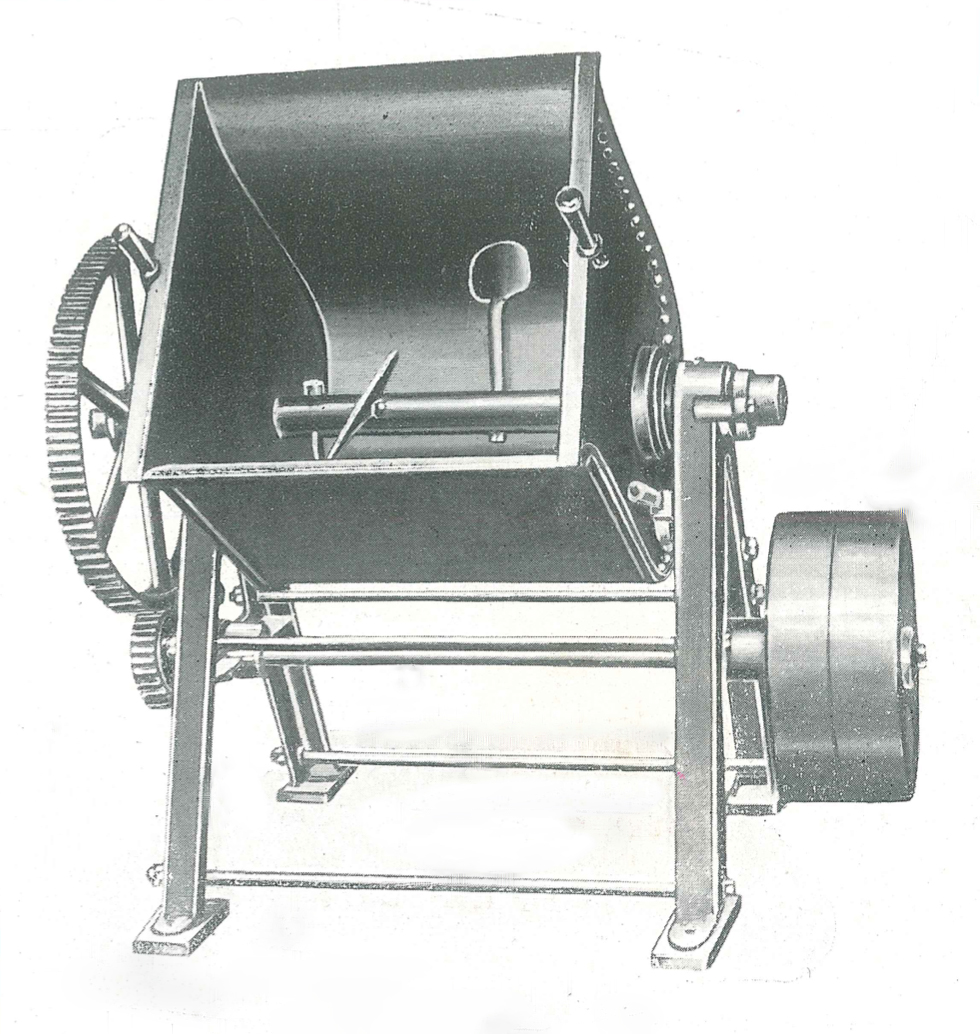 The first machine in the production process, the mixer mixes semolina and water to create the dough. The operation must be carried out in a sufficiently short time to avoid any aeration and fermentation of the dough.

Giovanni Fabbri chose a model that had a capacity of 35/40 kg of semolina and a tank 450 mm in diameter. This allowed an hourly production of between 75 and 120 kg. To obtain the right dough, the operator had to use about 8/9 litres of water per 35 kg of durum wheat semolina.

Once the dough was ready, it was immediately placed in the kneading machine. 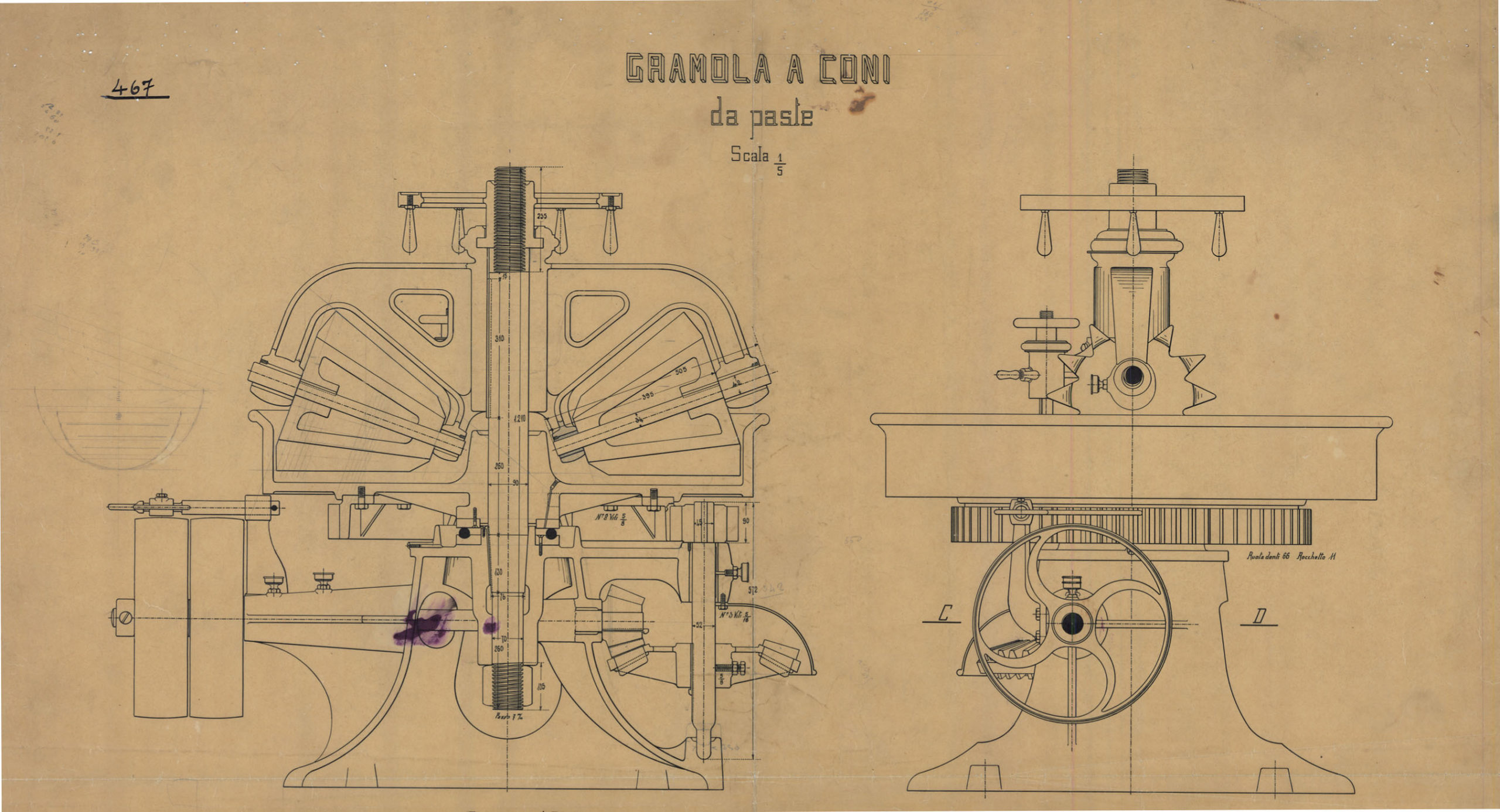 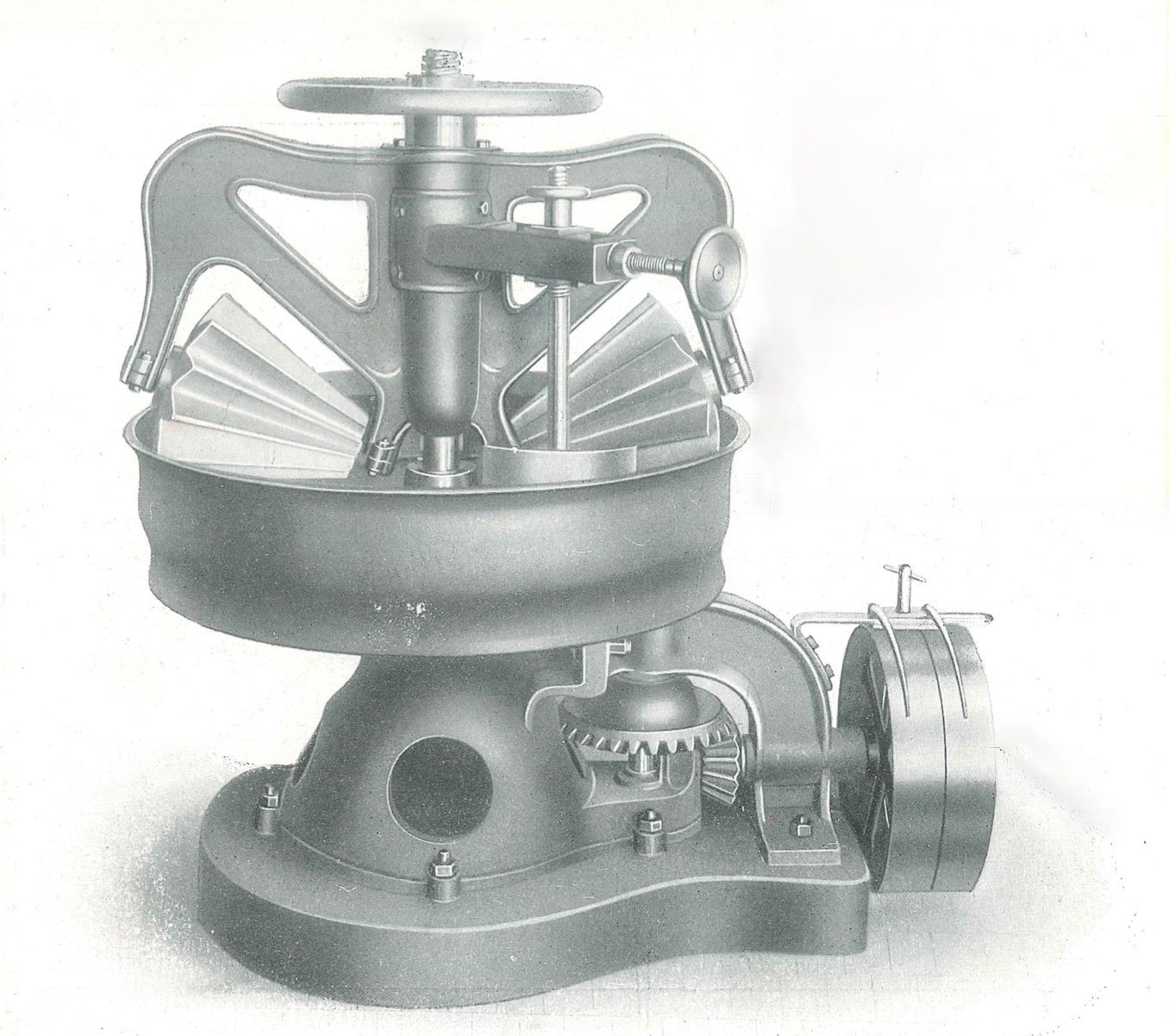 The kneading with this machine completes the work carried out inside the mixer. Its task is to make the dough smoother and evenly mixed, a critical phase to give the dough a good appearance. The pasta was kneaded for about 10-15 minutes before it was ready to pass to the extrusion press.

In 1911, Pastificio Fabbri chose a model with grooved, tapered rollers with a capacity of 35/40kg of durum wheat semolina. The metre diameter of the tank allowed an hourly production of about 75-120 kg.

3 and 4. The extrusion press 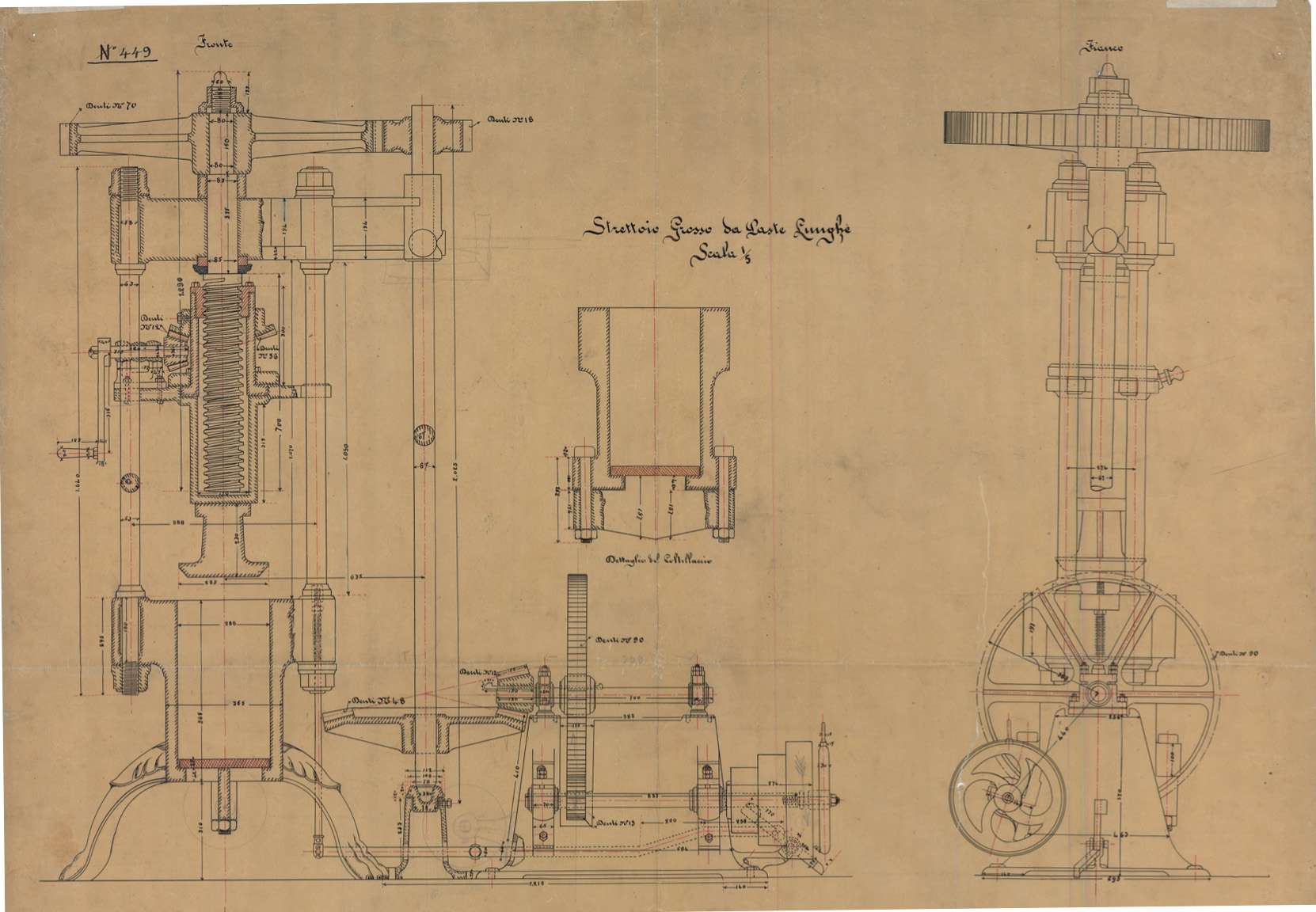 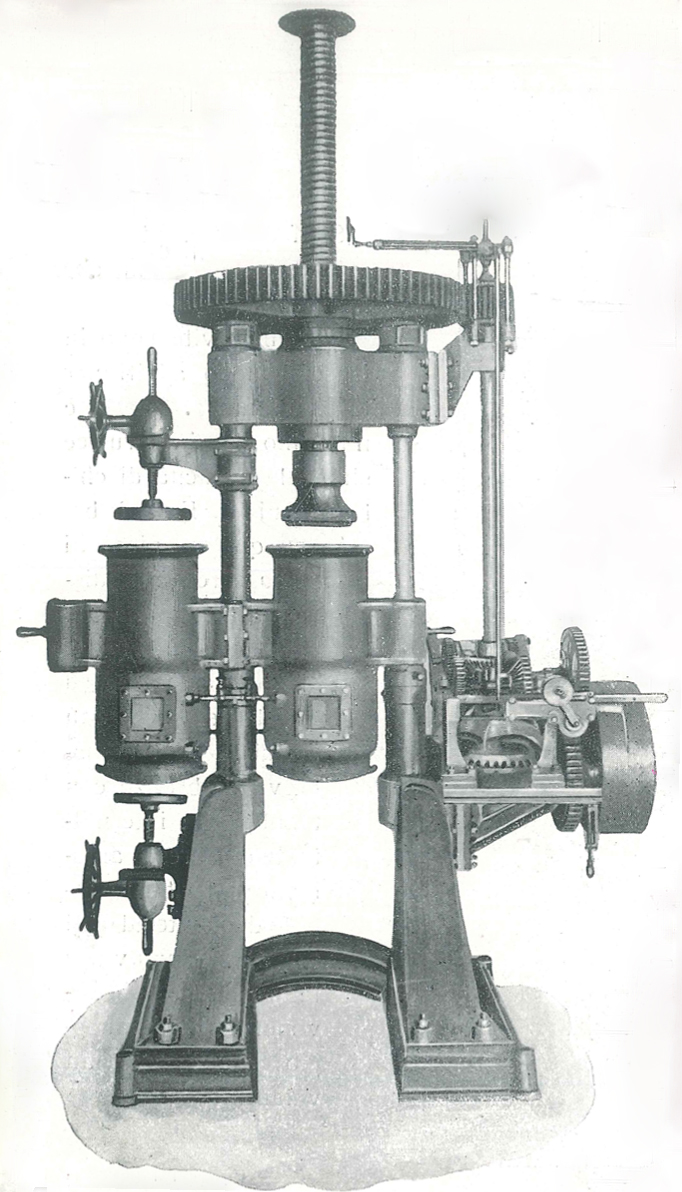 After kneading, the dough was passed through the extrusion press, which was vertical for the production of long pasta shapes and horizontal for shorter, cut pasta shapes. The dough was manually placed inside the “chamber” of the press and pushed under the pressure of the screw through the die plate. With holes of different shapes and sizes, this die plate gave the pasta the desired shape as it was pushed through.

In 1911, the Pastificio bought two state-of-the-art models with a diameter of 285 mm (280 mm for the horizontal press) and “automatic friction detachment when the dough in the chamber is finished and sleeve for hot water heating”, as the quote says (see photo above). These machines allowed the production of between 60 and 120 kg of pasta per hour, depending on the quality of the wheat, the dough and the chosen shape.

The vertical model had two pressure chambers that made it possible to greatly optimise the extrusion. In fact, while one chamber was active, the operator could clean, reload and replace the die plate of the other chamber. The extrusion press for cut pasta, on the other hand, was equipped with an automatic knife with 10 rotation speeds placed outside the die plate itself, allowing a wide range of sizes to be produced. 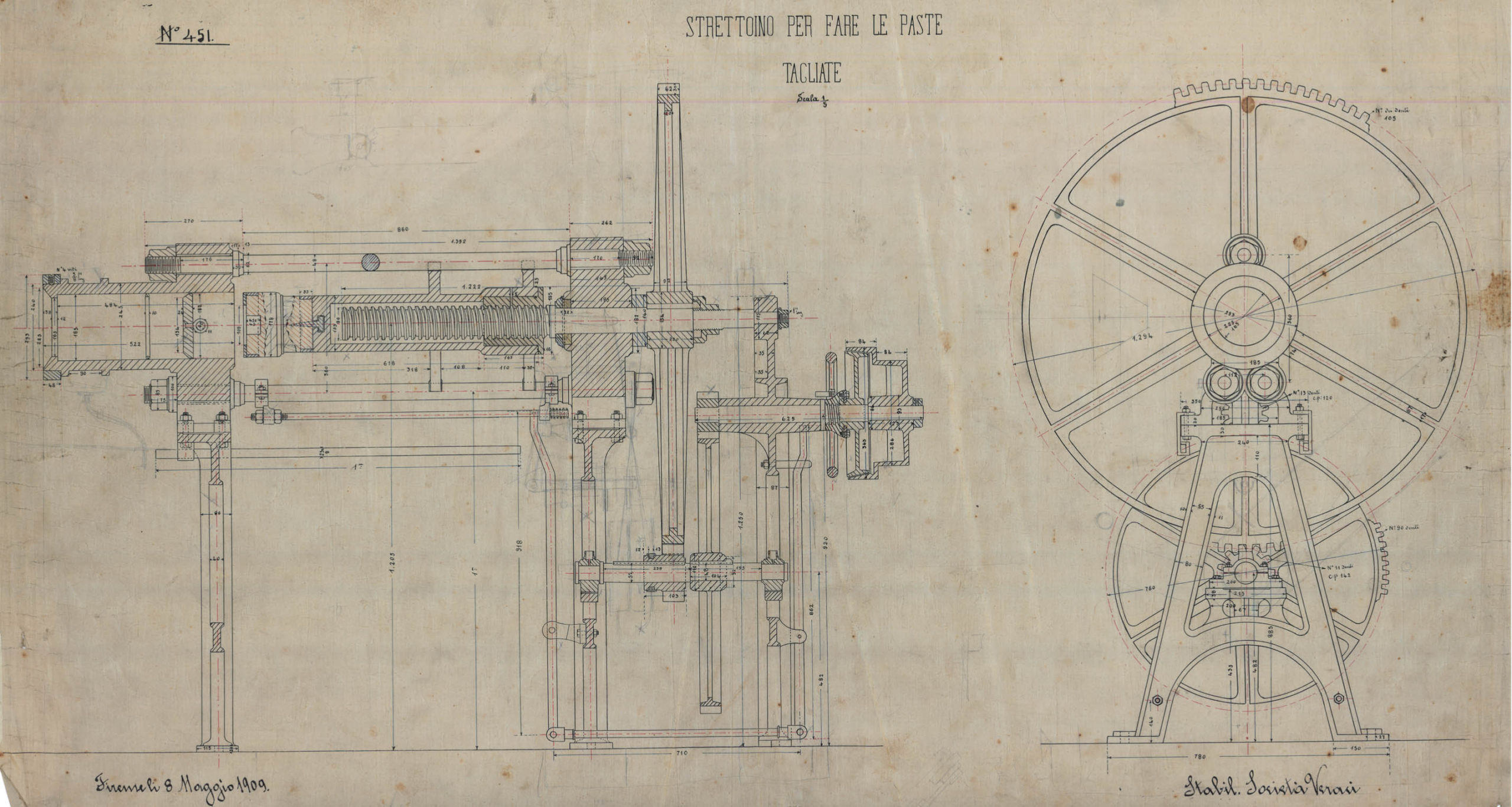 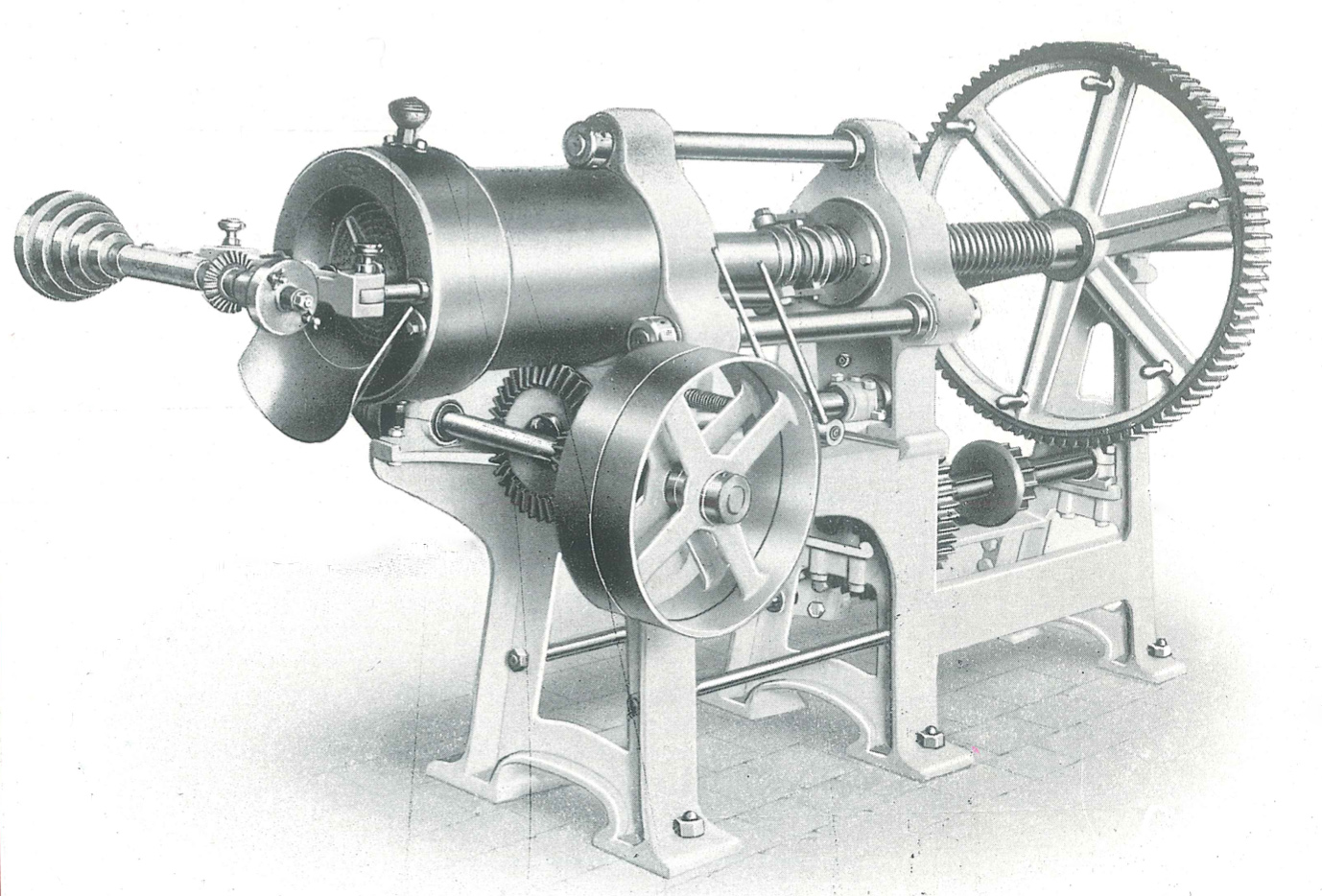 Once the pasta was ready, it was placed in the drying cells for three days for short pasta shapes and up to six days for longer shapes. To date, Pastificio Fabbri has always complied with these drying criteria and has maintained the same production volume. 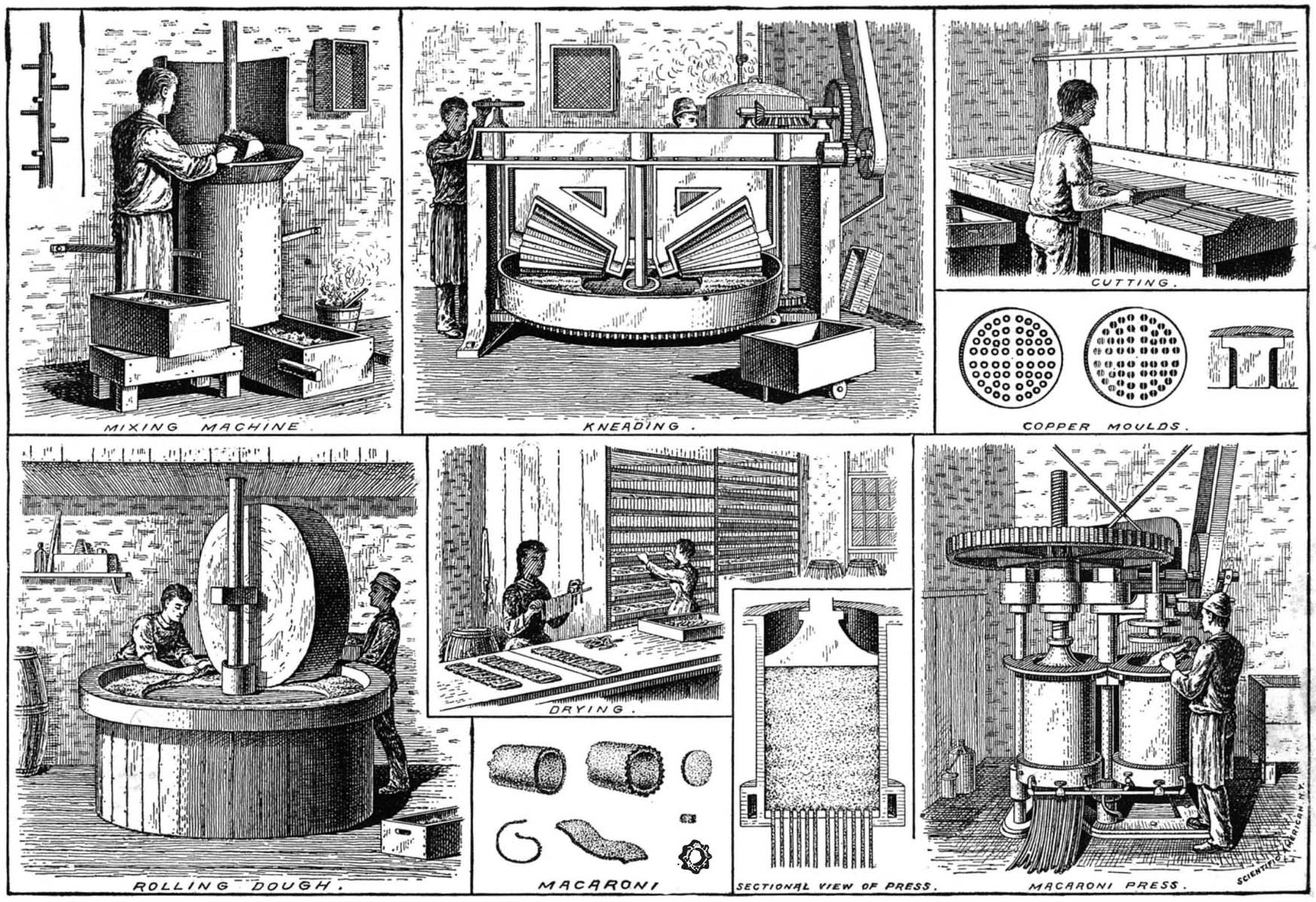 Illustrations of the “Columbia Macaroni Manufacturing Company”, pasta factory in New York City depicted in the magazine Scientific American, 27 May 1893

[1] The Veraci archive has held a declaration of considerable historical interest from the Tuscan Archival Superintendency since 1985.

[2] “Strettoio” was already established as synonymous with “Torchio” (extrusion press) in the 1st edition (1612) of the Vocabulario degli Accademici della Crusca, p. 857.